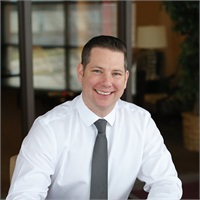 Geoff Glazier had three sources of influence growing up – Ken Griffey Jr., Michael Jordan and Paul Kangas. The first two were heroes to untold numbers of kids, for reasons that are fairly obvious. Kangas, not so much.

“He was the old guy on the ‘Nightly Business Report’ on PBS. My dad and I used to watch that show every night. It was one of those shared experiences with Dad. Paul Kangas taught me my first lessons about stocks, money and investing.”

Geoff’s dad, Skip, is retired as head of credit and collection at Cincom. From him, Geoff says he inherited his work ethic, drive and outgoing nature. Skip lost both his parents at an early age and pretty much figured out life on his own. “Every time he talks to me, I learn a lesson of some sort. When I was younger, I thought he was just trying to annoy me. Now I understand what he’s been trying to say.”

Geoff’s mother, Connie, began working at the Hamilton County Board of Education at the age of 16 and retired after three decades. These days, she volunteers at hospice, doing office work and conscientiously making friends with the patients. Geoff couldn’t tell you how many funerals she has attended. “Mom taught me to have compassion for other people … I get more joy out of other peoples’ happiness than my own.”

He’s six-six and has a natural athletic ability. His parents put a golf club in his hands when he was five – he has a five to six handicap. But basketball was his sport of choice. For his first three years at Capital University, he was a forward on the basketball team, until he dislocated his kneecap in an on-court collision.

“Life has its ups, and it has its downs. It’s how you move through the down times that matter. Up until then, I was just a basketball player. The injury took that away. It made me think seriously about what to do with my life. It changed my focus from basketball to academics, then to finance and economics and eventually, my MBA.”

Not that he isn’t grateful for his basketball experience. “I’ll take the injury – I wasn’t headed for the NBA. But basketball provided structure and discipline. You have to be accountable to your teammates.”

Geoff lives in Ft. Thomas, Kentucky with his wife, Adriana. She’s a physician’s assistant at Cincinnati Children’s Hospital Medical Center and, Geoff says, she has a strong spiritual life and they share numerous common interests.

He’d like to be known as someone who gave more than he got, made people laugh and who was more about helping others than himself. “It’s the same with my work. I base my success on how many people I can assist in being successful in retirement. I’d like to help people figure out what their one-of- a- kind path to retirement is, because everyone is going to be different.”

On a professional note, as a Financial Advisor and member of the Group Plans Team at The Pinnacle Group…